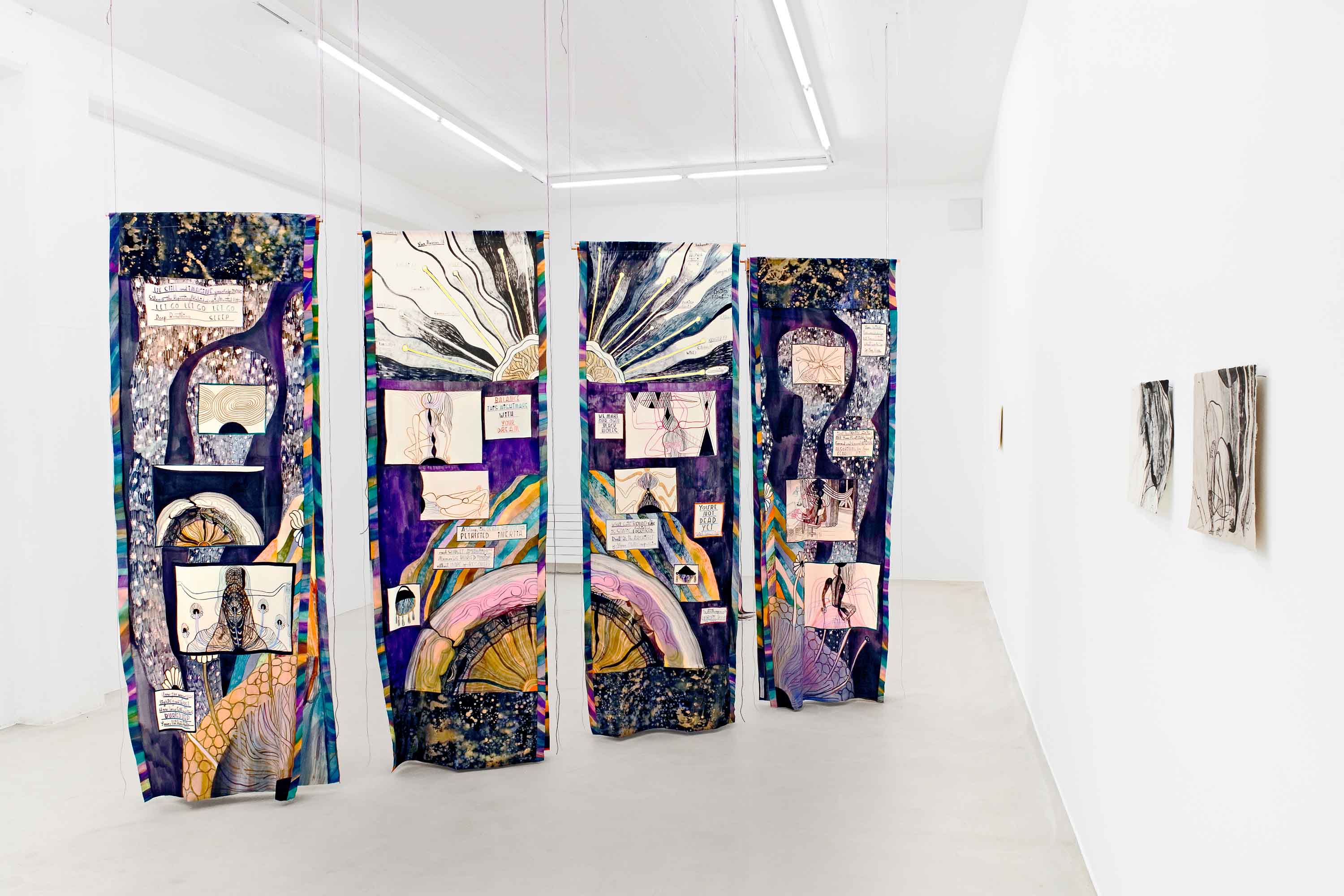 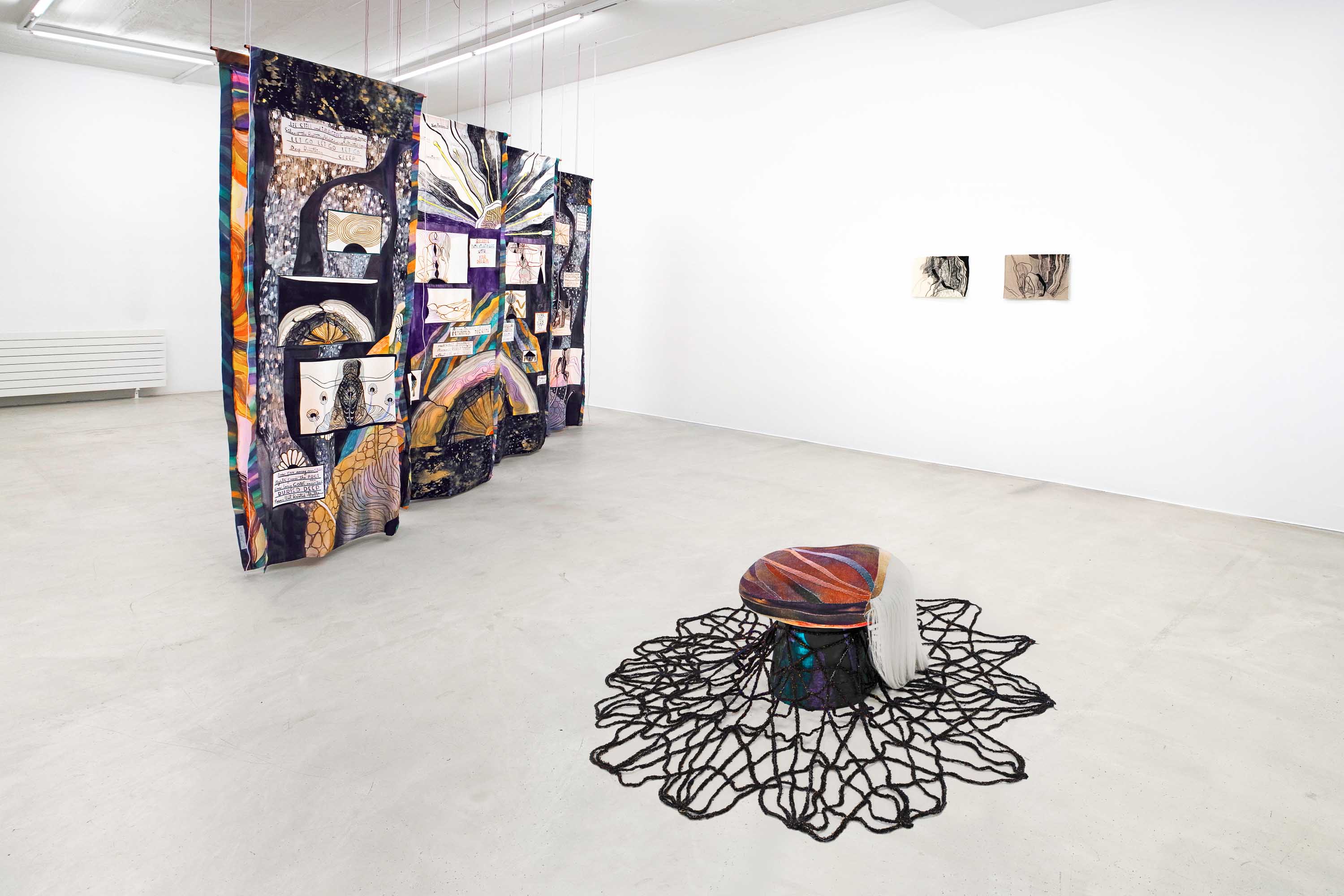 Emma Talbot’s recent works examine two concurrent states of mind, identifying key contemporary concerns, that Talbot proposes as an early 21st century Zeitgeist.
The concerns are counterbalanced; on one hand, the prevalent concern with the Anthropocene (the name of the present geological timescale in which humankind has made the biggest impact on the natural world) and it’s extension through philosophical, cultural and theoretical positions to propose a kind of ‘fin de siecle’ preoccupation with the idea of the world ending, with death, memory, the end of civilisation, provided Talbot with a sense of anxious stasis and inertia.
On the other, the prevalent desire for greater freedoms of personal expression, through gender politics and sexual identity, polyamory and fluidity suggested constant movement, development and potential.
Talbot’s approach to these two positions was to draw them through personal experience, to place the everyday against the scene of the larger natural world and the universe. Talbot’s work is always concerned with how the personal becomes political and how small acts of living become emblematic of a contemporary timescale.
The group of silk hangings, ‘Bound’ set up a number of ruminations on endings, on ancestors, burials, the earth’s demise and internalised anxieties which hold the contemporary person in an inert, fixed and afraid mind-set. Whereas the ‘Fluid’ group of hangings explore a Spring like burgeoning of life, love and energy.
The themes are extended through 3 Dimensional work. Talbot’s 3-D work is ‘drawing in three dimensions’ and articulates feelings and emotions just as her drawings on paper do.
‘Widow On The Rocks’, a figurative head resting on a painted papier mache form, surrounded by a woollen ‘net’ explores the idea of being alive but inert. A widow herself, Talbot revisits the Widow’s state of near to death – by being so close to death, she is almost not alive herself. Talbot considers how rocks are compacted flows of water and earth and how the widow as a poetic figure can stay still and become rock-like.
‘Fluid Love’ is representative of figures intertwined, perhaps two figures, perhaps one – at any rate, an idea of fluid physicality, and interchangeable relationship of forms. The piece is an attempt to maintain movement in something static. It also holds references to Talbot’s interest in the figuration of non-Western sources such as Japanese prints and Indian minatures.

This painted silk hanging is a set of thoughts about how life experience the personal becomes imbedded in personal narratives, sent out to a wider social network such as Instagram. Despite the ending of a relationship and her loneliness, the woman in the painted scenes sends out images of herself which are celebratory.
Talbot’s work is always concerned with the personal and internal narratives, moving between media, but holding drawing as a basis for the construction of imagery. She is interested in drawing as a means of recording the imaginative structure of imagery from ‘the mind’s eye’ more accurately than external photographic image-framing. However, the inclusion of our intimate relationships with technology has been a key parhttp://nicolaskrupp.com/artists/emma-talbott of her most recent work. Talbot is interested in the format of the scroll for painted images, as comparative to the way we look at images and text today, scrolling on our phones.