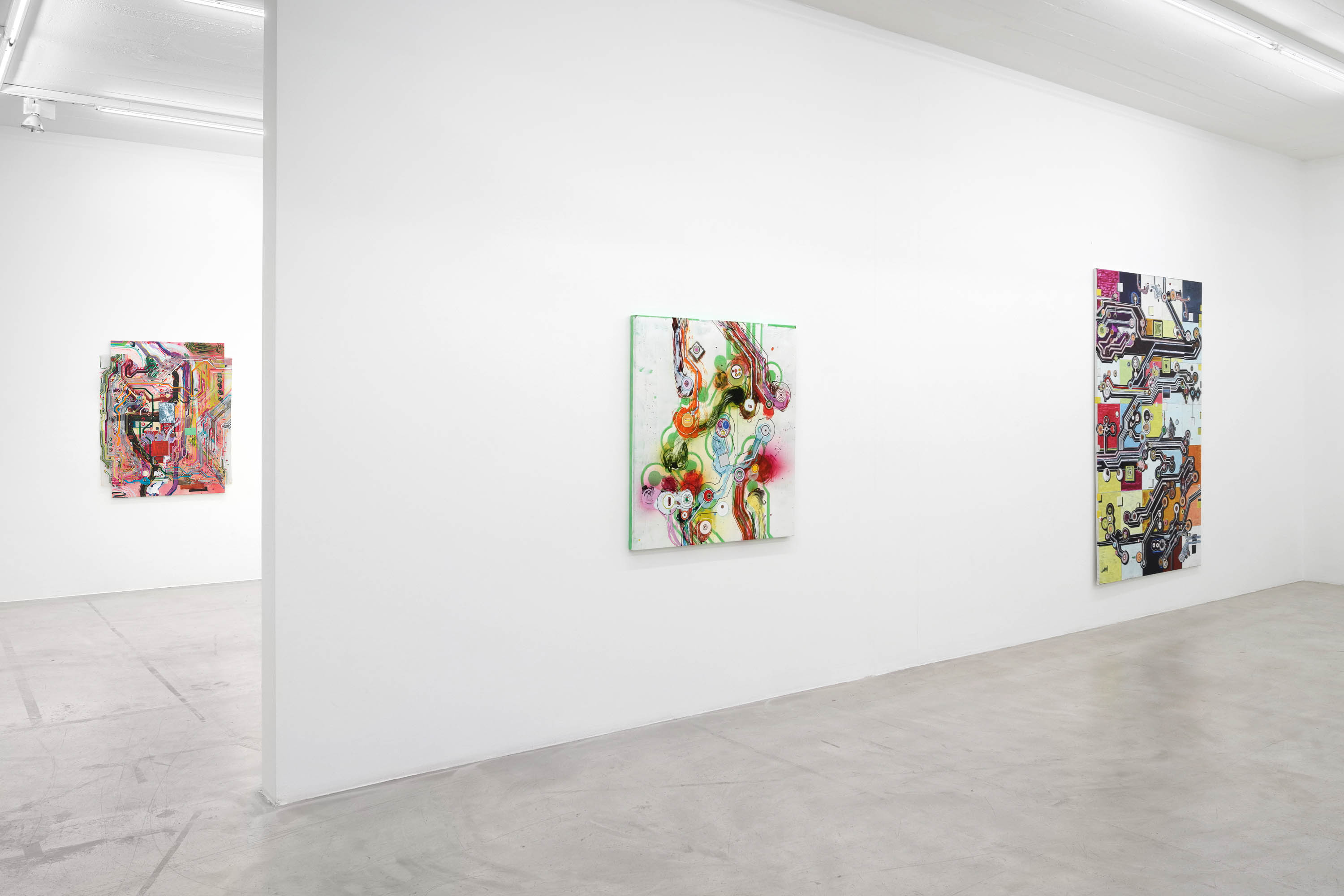 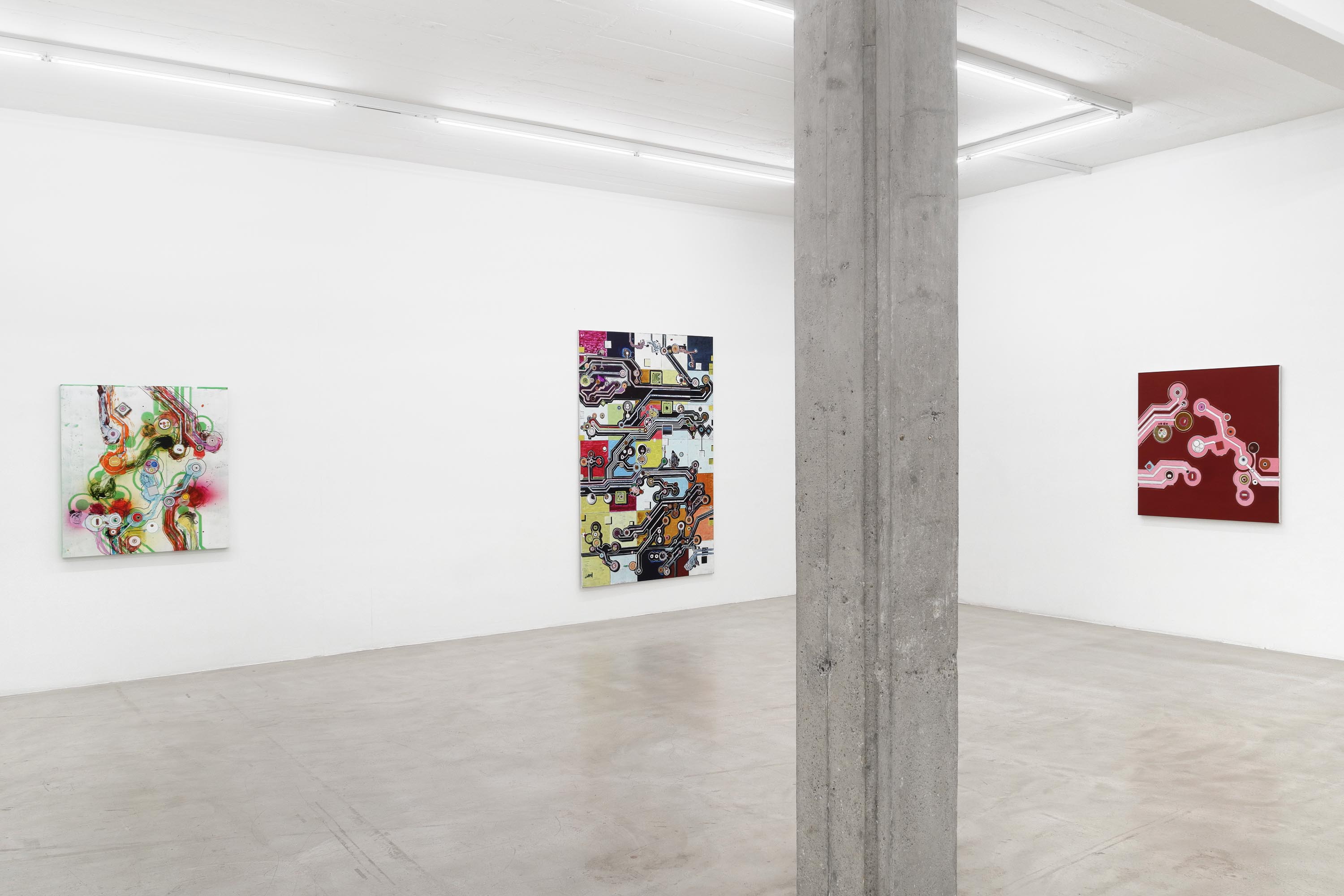 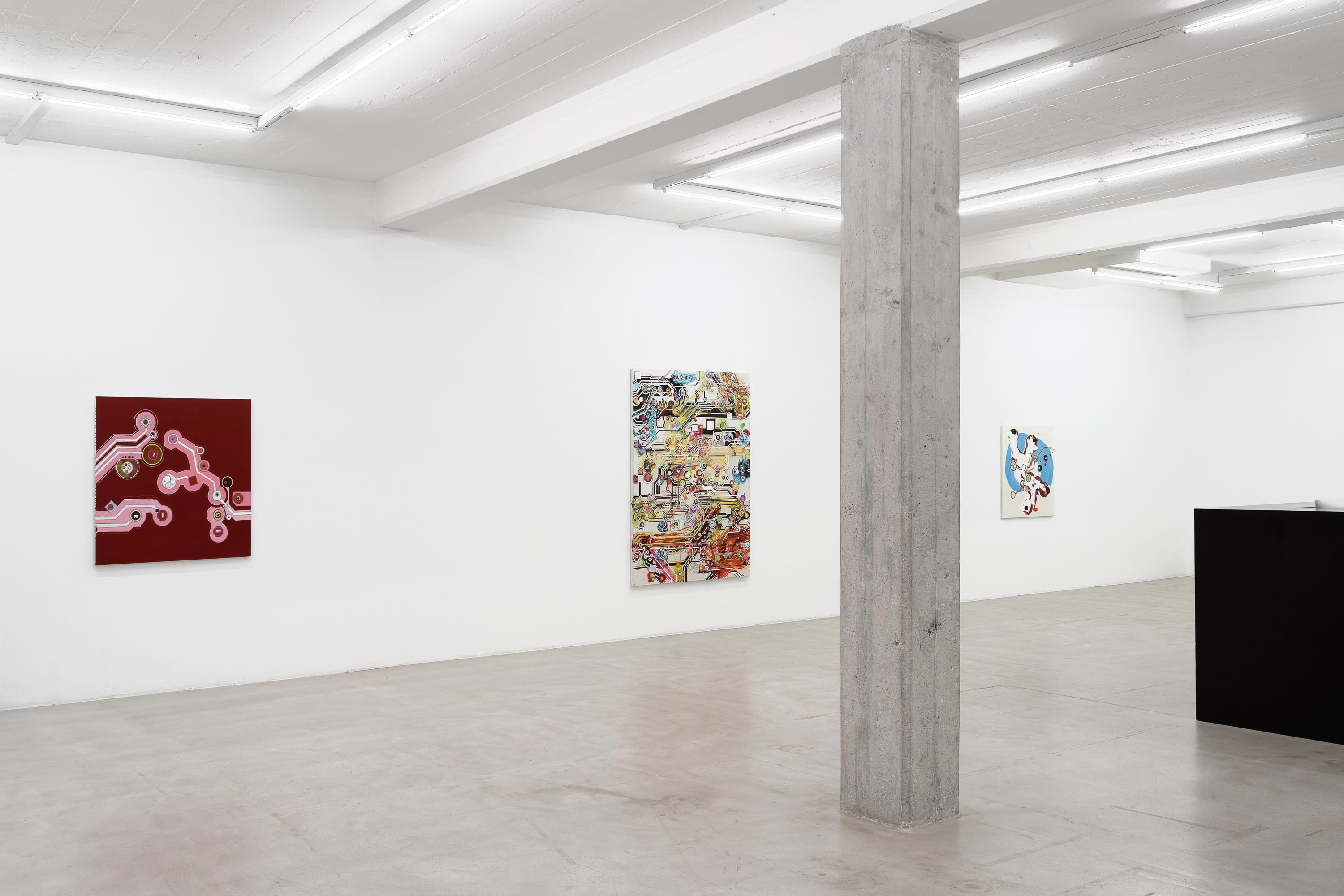 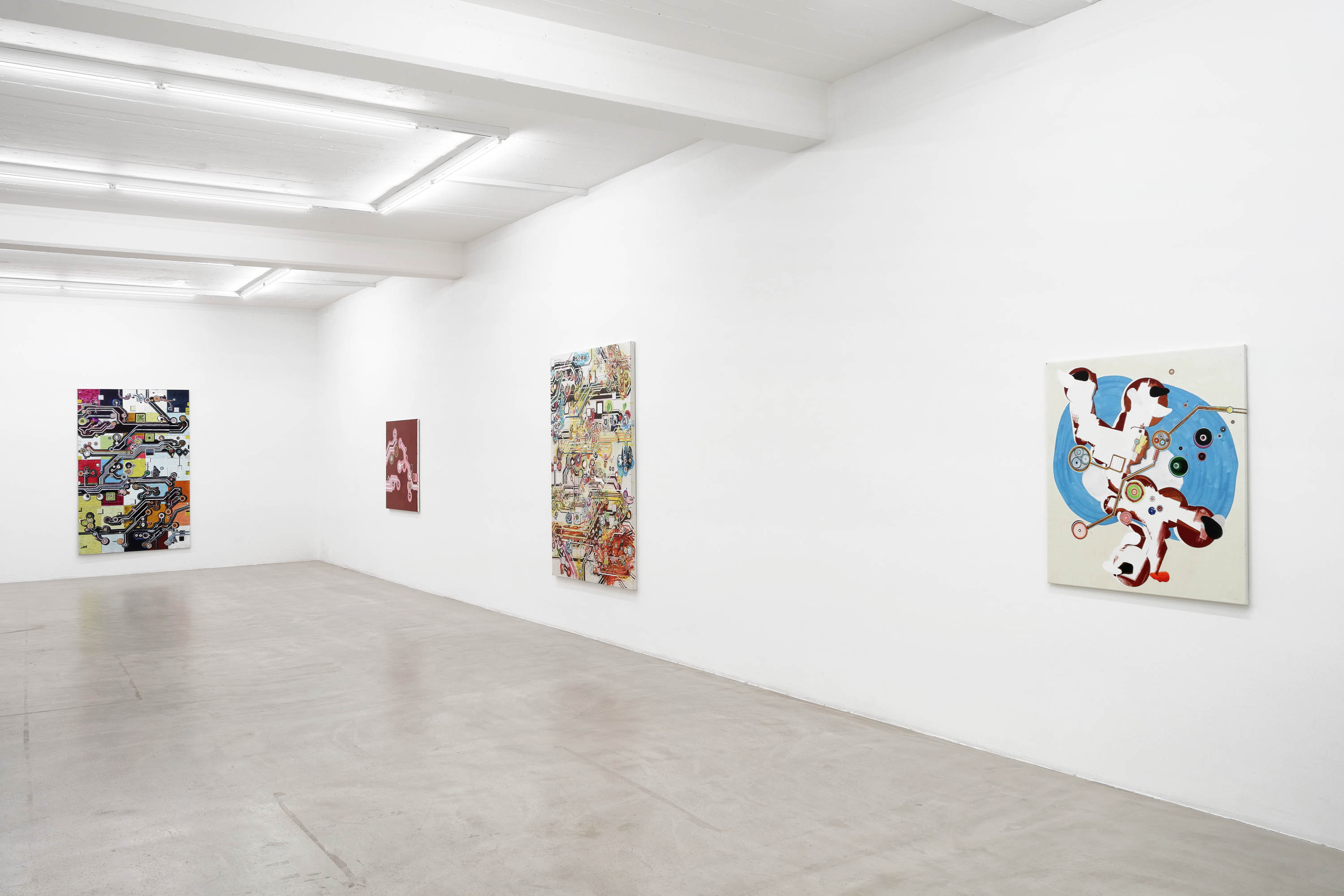 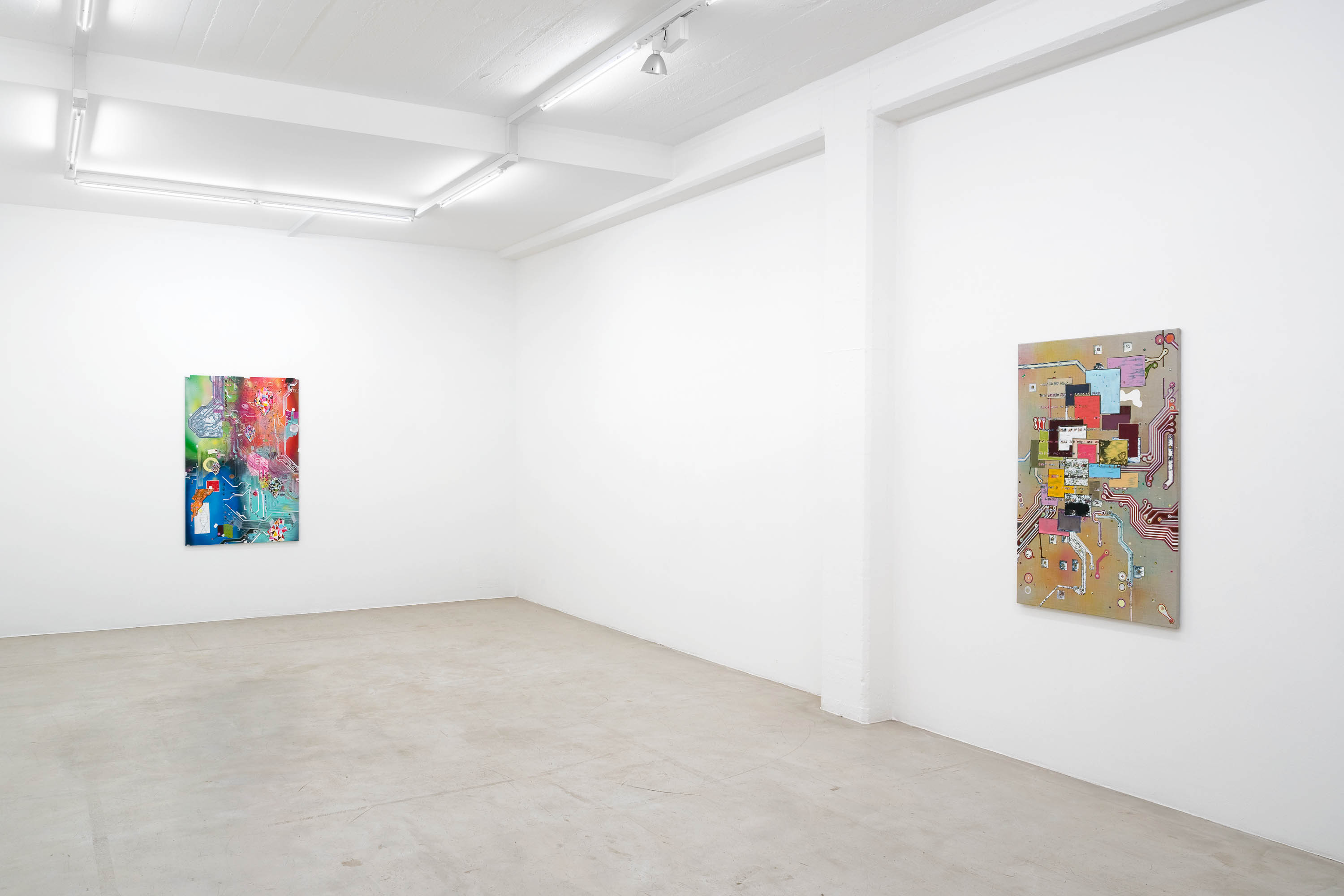 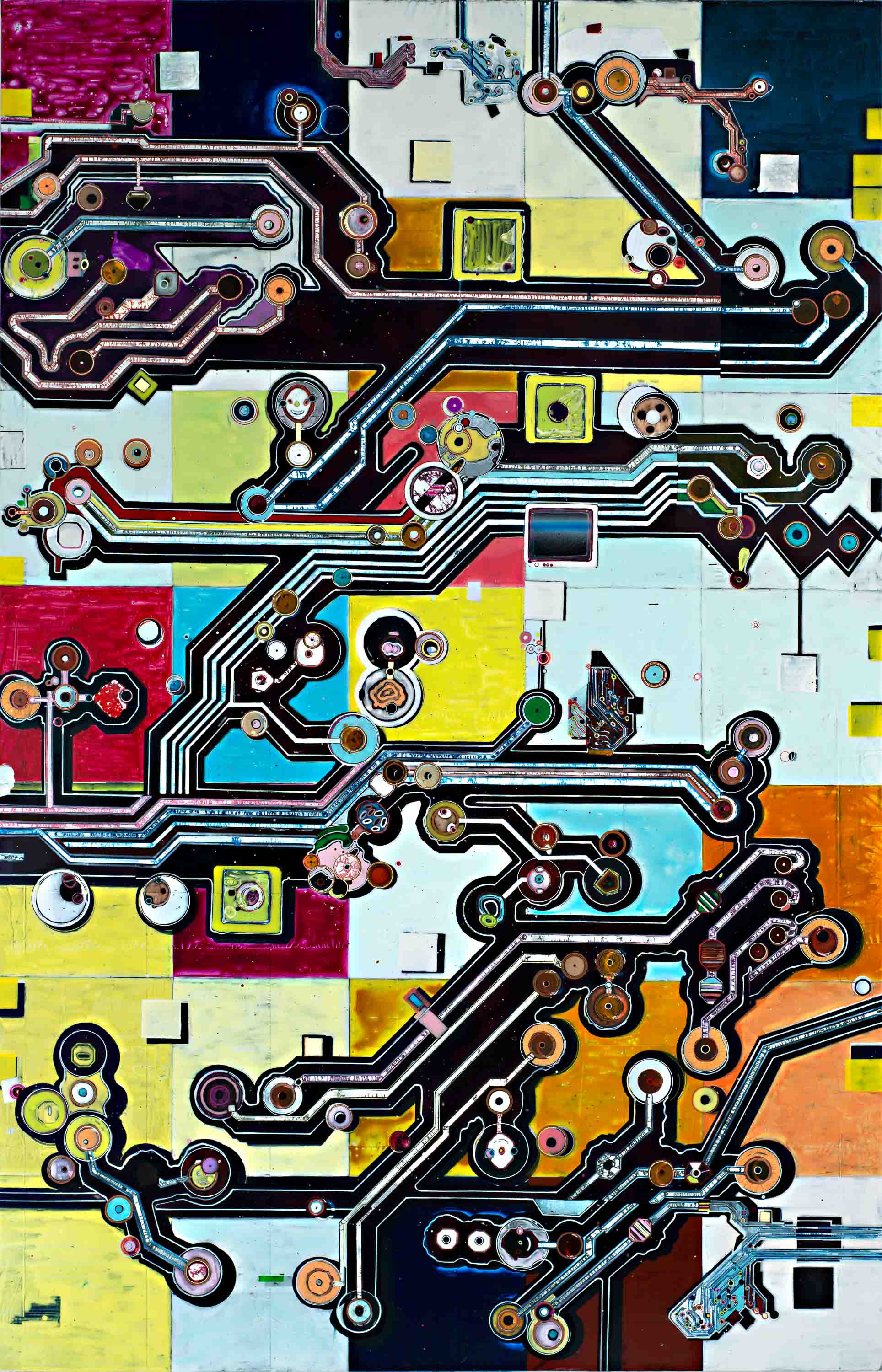 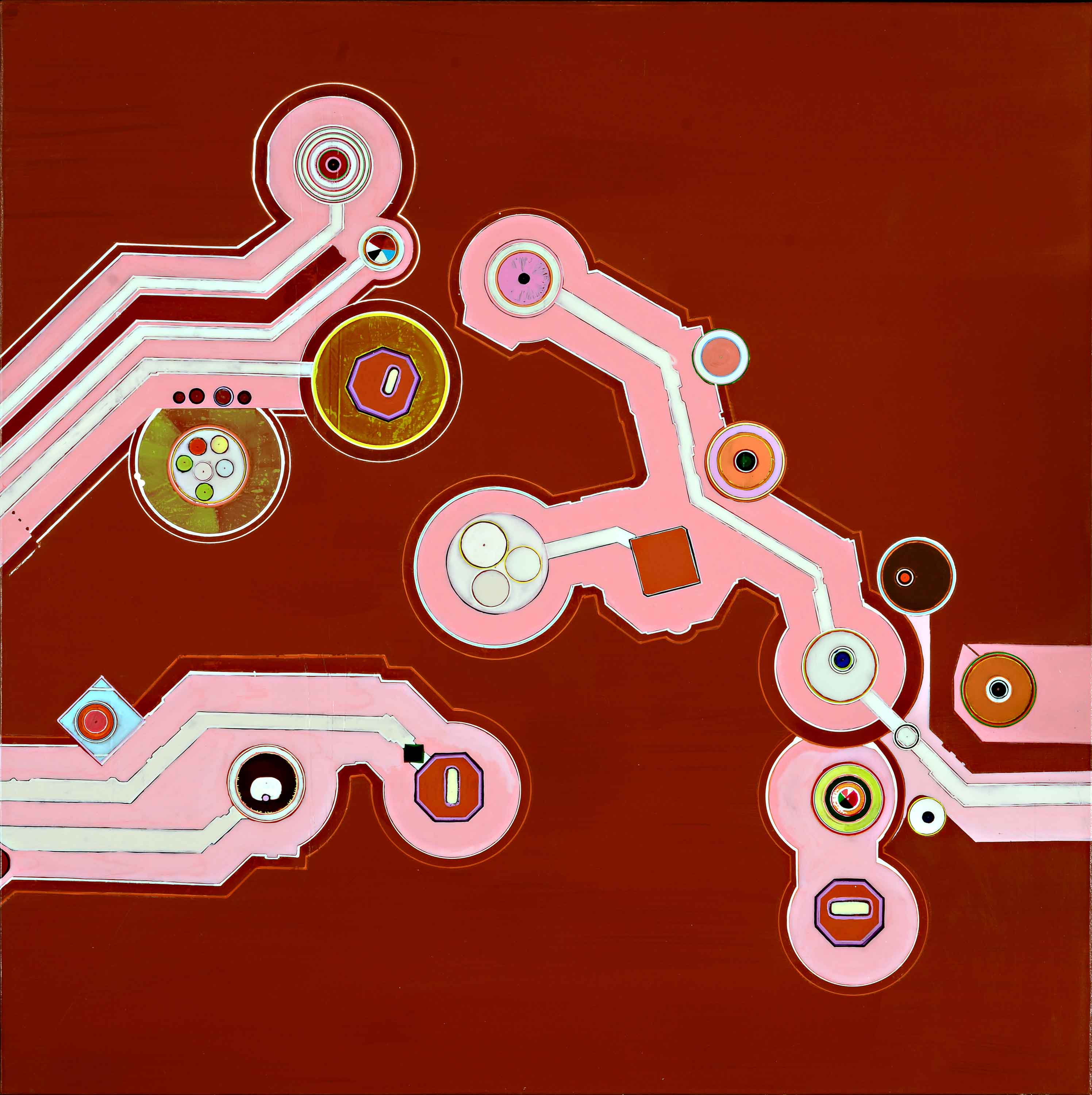 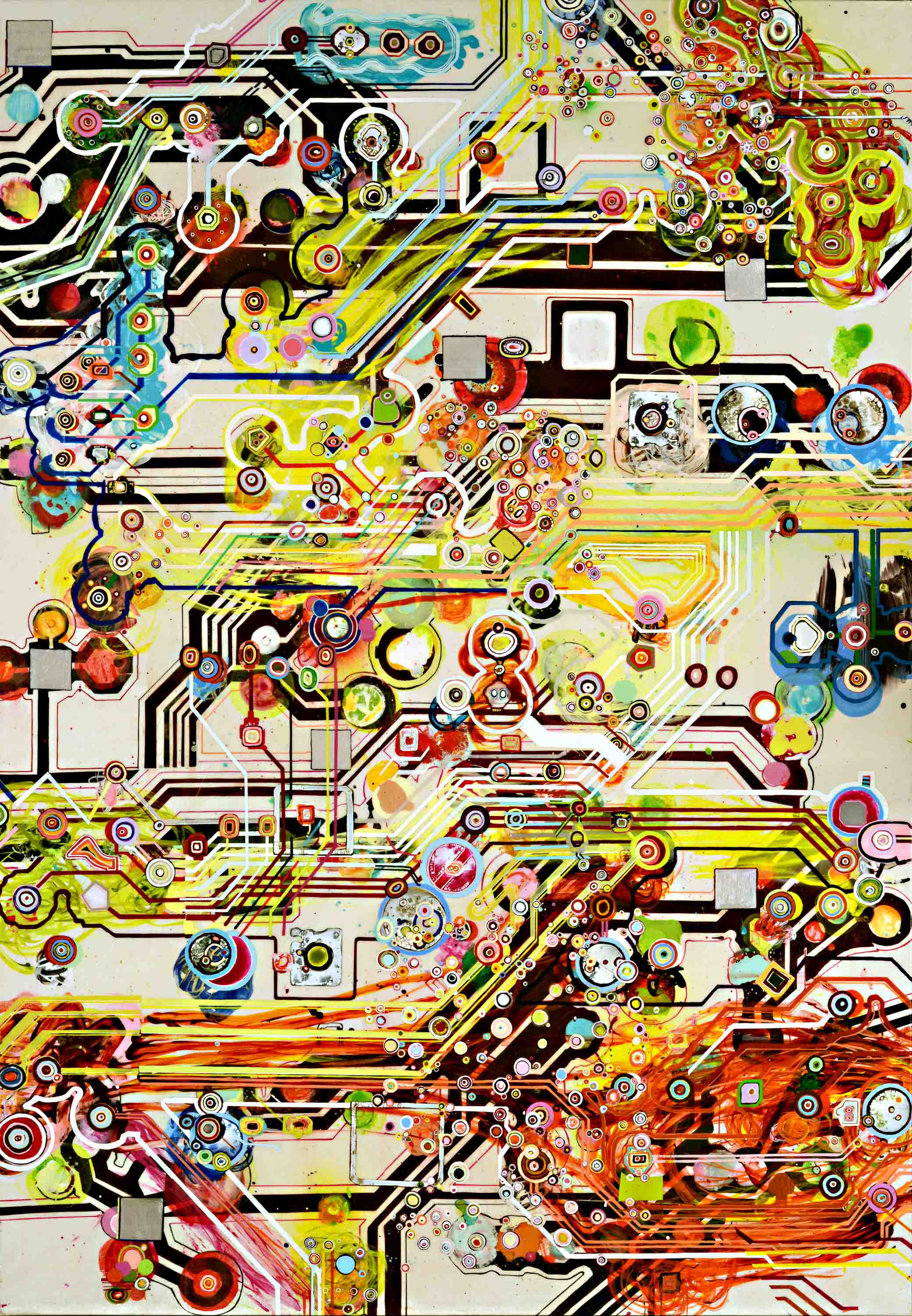 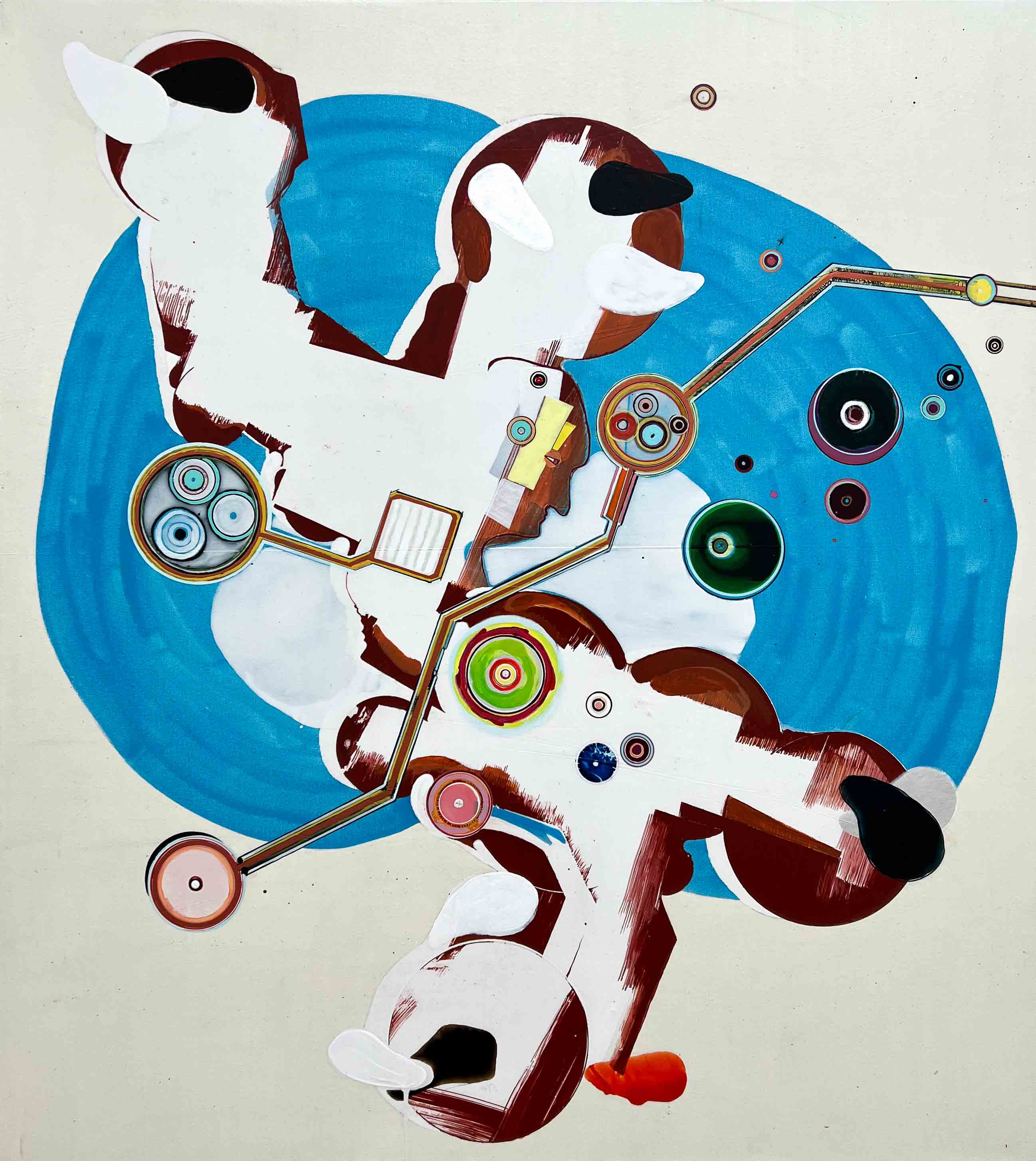 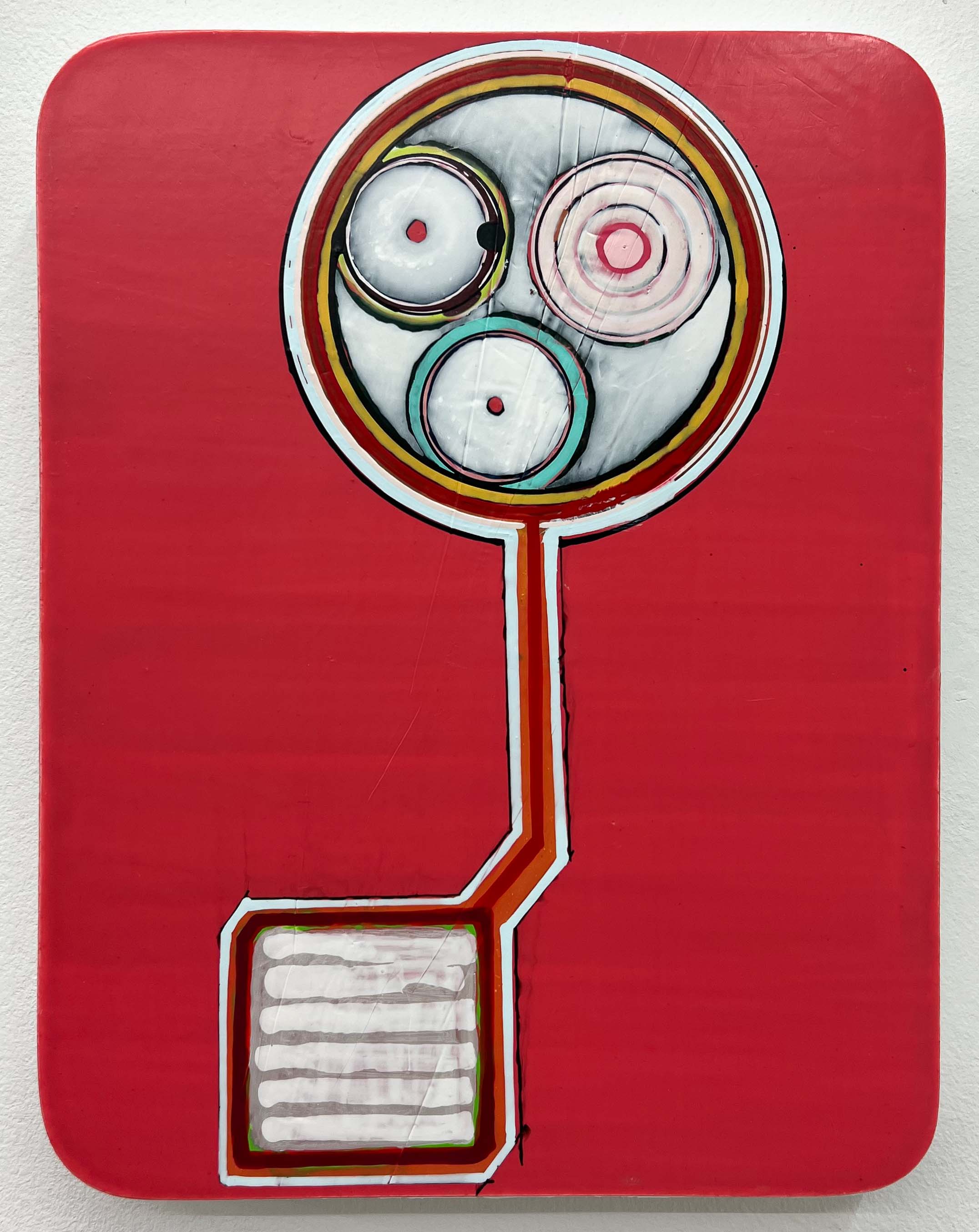 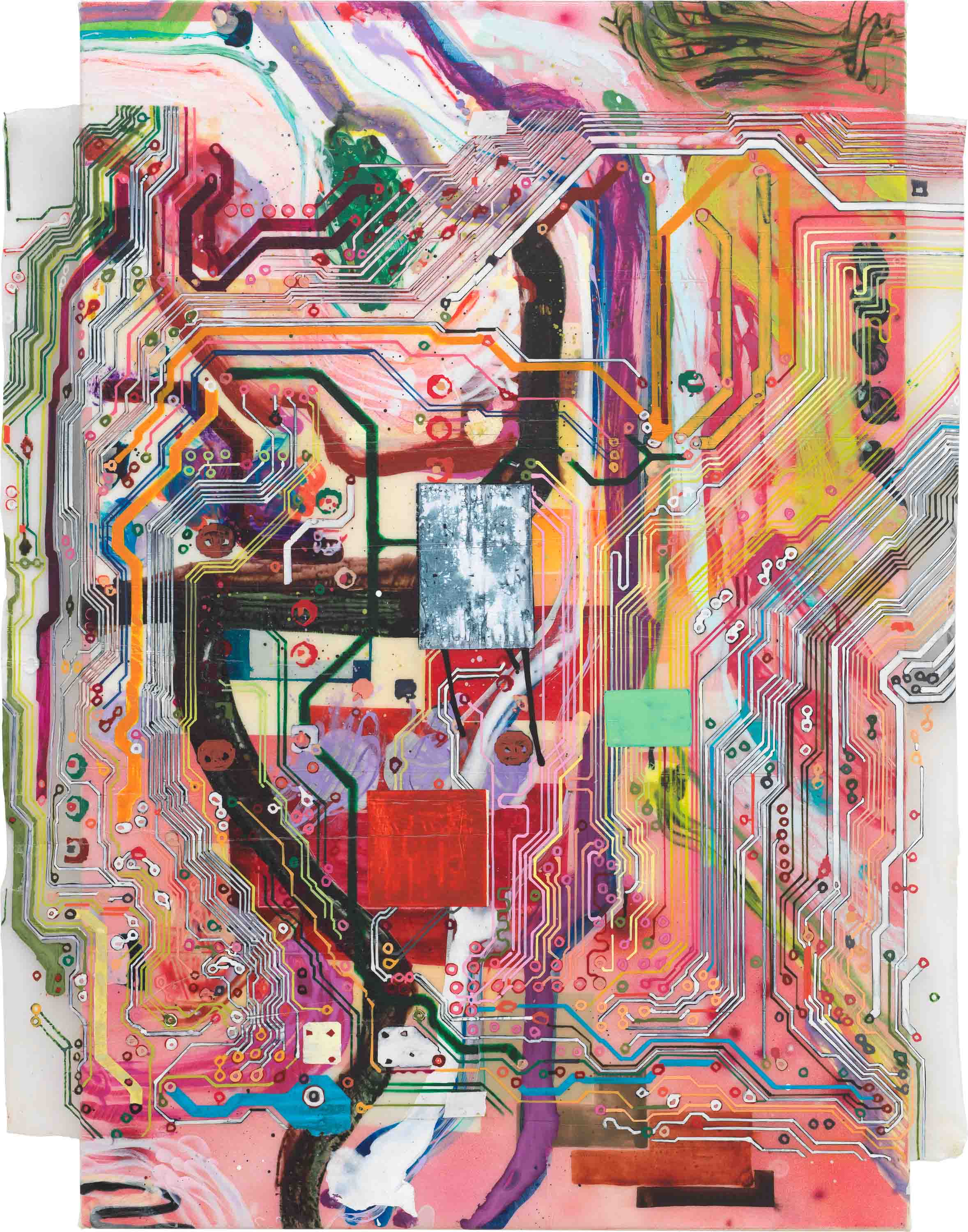 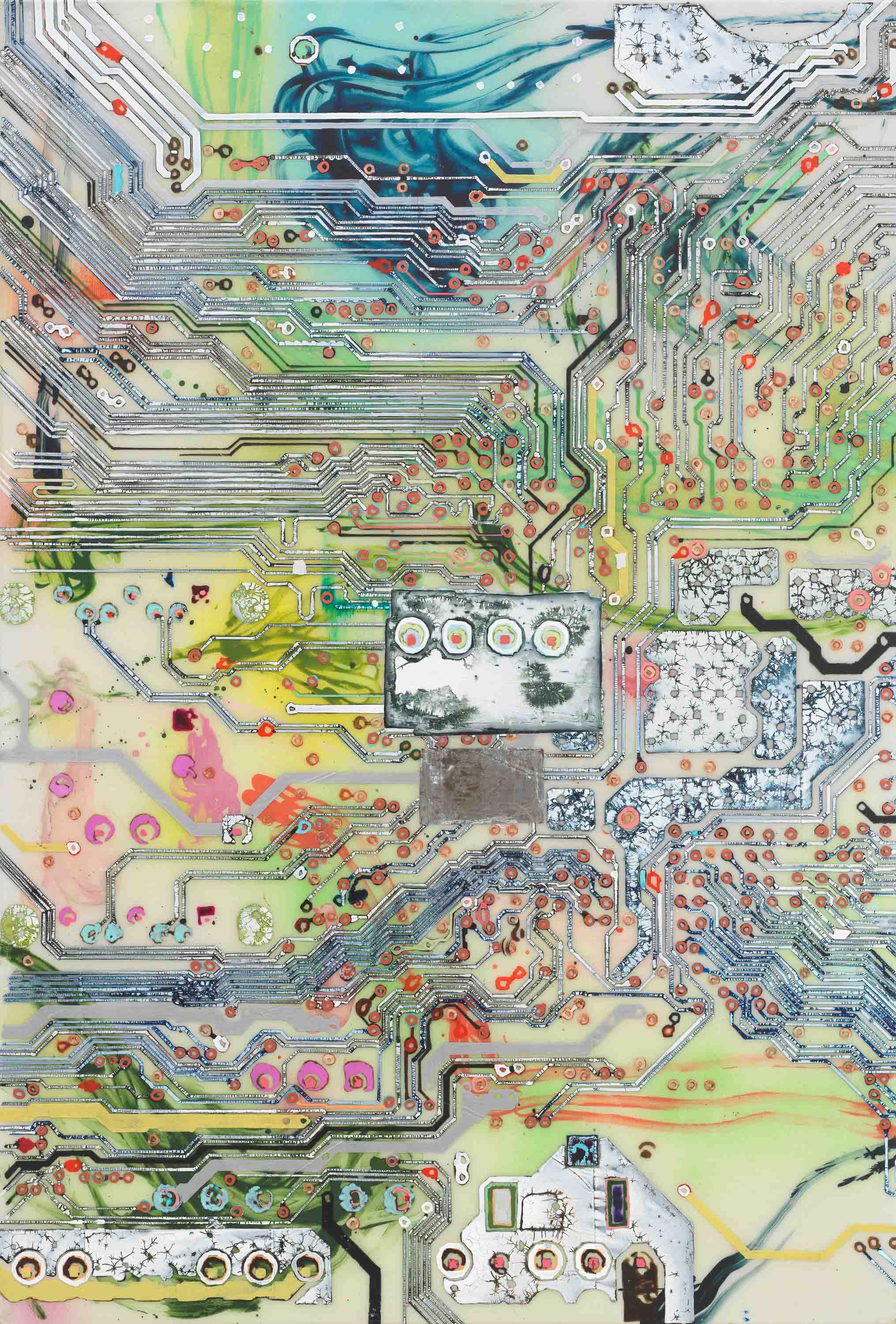 The title Hold and Catch Fire refers to a coding instruction used by computer engineers to cease processing and immediately restart. Helbling applies it to aesthetics, exploring themes such as circularity, faults within the system, virtual identity, and the possibility of a socio-political reboot. The exhibition includes eight new paintings, each expanding upon the techniques the artist has developed through years of experimentation, both in abstraction and representational imagery, and of the larger cosmology his oeuvre offers to viewers.

Hold and Catch Fire #1, a possible starting point for the show, presents a pseudo-circuit board painted in pristine shapes and lines, set against a monochrome backdrop indicative of traditional religious icons. As an uncluttered image, it allows for the contemplation of technology as an aspect of nearly every facet of modern life; yet by rendering the form and feel of internal hardware intuitively rather than illustratively, Helbling also suggests a mythic or archetypal quality to mechanical imagery, i.e., computer hardware produces an emotional response when we in our time see it.

This provides underlying tension when other paintings in the show become busier, more complex, as in Hold and Catch Fire #3, which contains similar geometric/circuit-like lines—albeit this time layered over a backdrop of square color patches. On the surface, these patches appear to give the composition its sense of order, yet the closer one looks, the more its order is undermined. The circles at the end of Helbling's sinewy pathways, for instance, culminate in orbs that sometimes look like eyeballs staring out; or like emojis with sinister grins. Some also produce sprays of color, like vintage industrial steam contraptions, created via the artist's subtle use of action painting technique. There is even a section in the top-left where the color squares drop out completely and a deep blue space, flecked with white paint (suggestive of stars), offers a kind of dimensionality or infinite space just beyond the grid.

Other paintings, such as Hold and Catch Fire #4, eschew the canvas as organizational backdrop altogether, opting instead for a grid of diagonals and circles which layer futuristically over globs of expressionistic gestures. The feeling is one of meltdown, virus, or even the ghost taking over the machine. Nothing is specifically narrative here; yet the image feels dramatic in every corner.

These ghosts appear throughout the other works in the show, as well, and give them a sense of urgency. As such, the universe Helbling offers is both unstable and endlessly filled with wonder. Computer hardware-like imagery transforms into urban planning layouts which shift into molecules under a microscope. Motherboard #2 is evocative of a subway map, for example, with its color-coordinated lines and minimalist cross-hatches, while Interface #3 suggests we've built our virtual ecosystem around mysterious unseen energy fields, the potential of which can be destabilizing; yet in the hands of Helbling are oddly poetic and full of possibility.