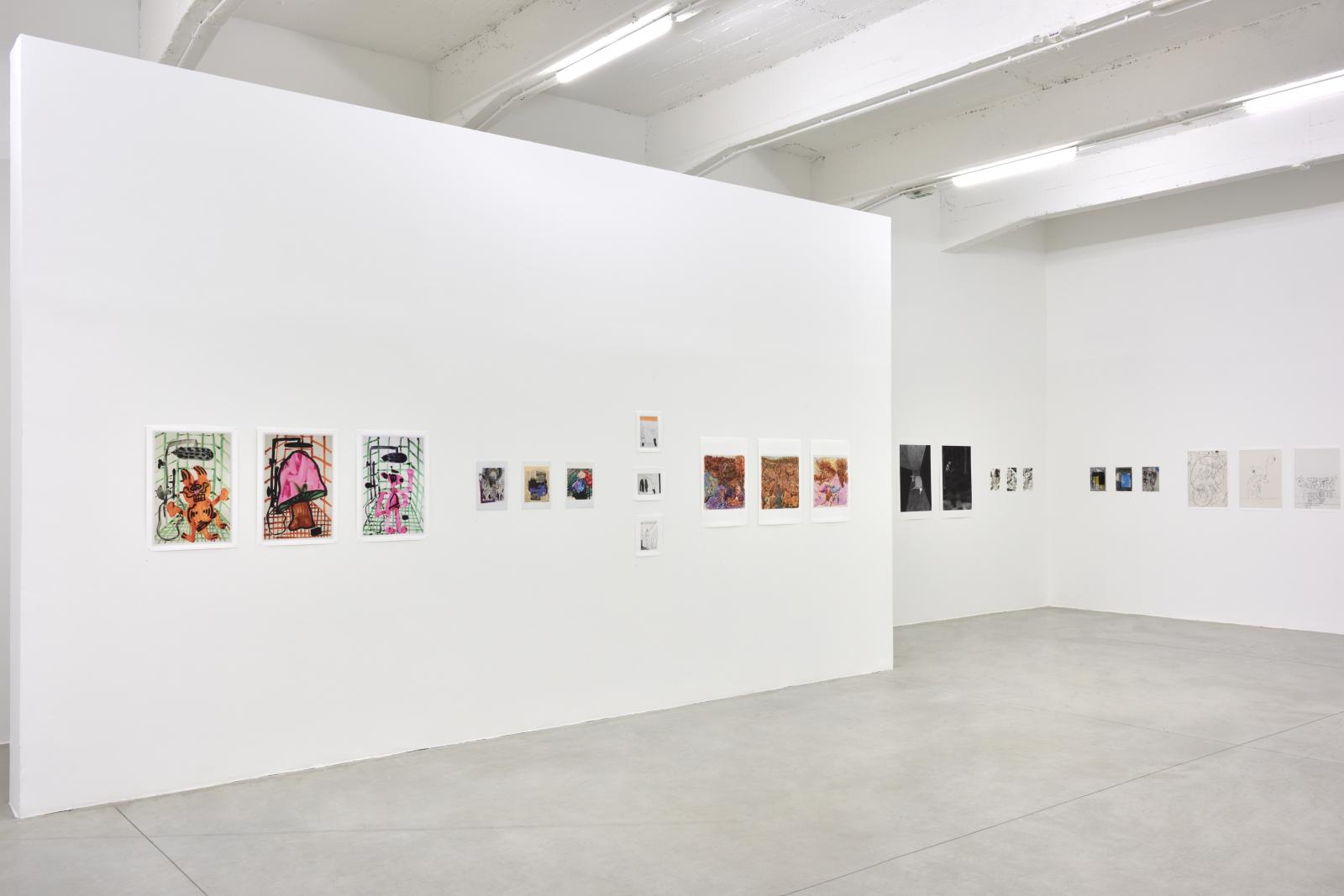 A collective publication in The Drawing Centre series, titled Family(1), gathered about sixty artists as well as occasional (or motivated) draftspersons, emulating the now-defunct Permanent Food magazine.
There is now an exhibition of the same title with 62 artists selected by 4 curators (including 2 artists who were also invited to participate in the show), who each chose 15 artists.
A composite sauce was the modus operandi for the exhibition, lining up what is correct or fluid about gender, origins and extravagant styles, thus allowing for a serious, dazzling and uninhibited array of artworks where colors, collages cutouts and things made with feathers shake up lead pencil drawings.
Everyone has exercised their style: Joe Bradley has played the outsider and the celebrated [artist], the dilettante. Seungduk Kim has drawn up her list in halves, the first part reconnecting with the Consortium’s connections and family, with nostalgia and emotion; the second half going off to explore the high seas.
Tobias Pils has enjoyed a local focus in Vienna, picking up community artists and revered figureheads alike. Franck Gautherot has taken charge of gender, inviting only women artists. In a friendly spirit, the old white male has played the cards of gendered otherness.

Stating the rules of the game helps to justify a kind of lightness—paper has been printed from digital files and will be presented without further ado on the walls of the three proposed rooms.
Without any artist name, without any reference to the inviting curators, drawings will be distributed on a first come, first served basis, depending on which ones will be dropped off first, and so on.
The entrance wall will bear the name of the 62 artists. A wall panel will tell which is what and who made what.
Way back in the depths of the Consortium’s teenage years, the distinction constituted in mimicking the work of certain “conceptual” artists, forming a circle of “concept” exhibitions (in the same way we speak of a “concept album” for recording artists) such as Présence Discrète (1983), Une autre affaire (1989), Pièces au sol (1993), or Country Sculpture (1994) (2).

One of the rules of the game, without the fussy French delights of the exquisite corpse and other rancid frills, suggested that all 4 accomplices each choose 15 artists. All of them were asked to send in 3 drawings in a digital file format (pdf, tiff, jpg) with a good enough, printable resolution at a size chosen by each contributor from A1 to A4 formats (23.4 x 33.1” to 8.3 x 11.7”). The printed drawings are pinned directly on the wall, in the order they arrived. If possible, another print will be available for sale, only one in any case.
No name, no signature, only images.

No shipping, no insurance.
Like a memory of all these stories about mail art, exhibitions by fax, Telephone Bilder (Moholy-Nagy!), Vasarely’s multiples trafficking, The work of art in the age of mechanical reproduction(3), or real-fake Warhol bootleg screenprints perpetuated either by the studio or by mysterious associates.
Here, no expectations about democratization or decorative utopia, the only kind of exhilaration consists in rounding up artists of all kinds for a little printed journey, like an expanded mood board; in having the most diverse proposals displayed side by side, in preselected formats, through chance renderings, aligned at their midpoint for a one-way ticket toward bold, multiple geographies. That it is epitomized by Viennese particularism is no more significant than any other non-Western contingency, whether gendered or family-related! A subdued fantasia remains, not so much of a razzle-dazzle yet a tad funky.

(4) Warhol’s great series, Marilyn, Flowers, Campbell’s Soup Cans, produced at the artist’s New York base, referred to under the name Factory Editions have had semi-official, semi-sanctioned prolongations made from 1970 on by the Sunday B. Morning studio in Belgium, and printed in 250 copies. They are stamped with black ink on the back, with the inscription “Published by Sunday B. Morning – fill in your signature.” The agreement with Warhol did not last long and a few very rare copies exist, with the handwritten mention This is not by me. Andy Warhol.